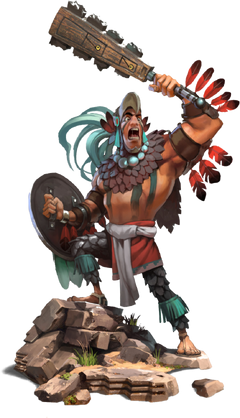 The Units in Civilization VI use a "1 Unit Per Tile" system, but also adds a combined military system in which a normal arms unit can stack together with a support unit, such as a builder, settler, field medic, battering ram, missionary, siege tower, anti-tank or anti-aircraft unit (as well as others) to then protect the unit which would otherwise be left at the mercy of your foes. Beginning at the Industrial Era, two of the same units can be combined into a Corps, which is less powerful than two individual units, but more survivable and takes up less space on the map (to reduce overcrowding). Additionally, in the Modern Era, three units can combine to form an Army. The ability to form Corps and Armies are unlocked by researching (in the Civics tree) Nationalism and Mobilization, respectively.